Dreams in Motion is a non-profit that gives the opportunity to receive a first class DREAM experience to a sporting event.

Mary is a breast cancer survivor and does so much for her youth community and we, Dreams In Motion, are surprising her with 2 tickets to see her favorite team, with her favorite athlete playing! Lamar Jackson with The Baltimore Ravens

Mary and her husband Mike, who is a Riverton native, have lived in Riverton for twenty one years.
Have fun Mary!🏈👏🏻👏🏻📣

On behalf of Dreams In Motion, a 501C3 non-profit organization, it would be an honor to recognize you and your husband, Mike, by sending you with an authentic Baltimore Ravens jersey and tickets to the Oct. 3, 2021, Denver Broncos vs. Baltimore Ravens football game in Denver.

On behalf of Dreams In Motion, a 501C3 non-profit organization, it would be an honor to recognize you and your husband, Mike, by sending you with an authentic Baltimore Ravens jersey and tickets to the Oct. 3, 2021, Denver Broncos vs. Baltimore Ravens football game in Denver.

Mary, you have been through a great deal of challenges and difficulties in your life, and we want to recognize you for your resilience and positive example you set in the Riverton community. Thank you for what you do! Simply, you are amazing! We want to recognize you as our HERO and get you to the Oct. 3 NFL game.

Dreams in Motion’s Mission Statement is to help transplant recipients and people with health challenges, such as you, to fulfill a small dream of having a first-class experience at a sporting event.  You will be our second Wyoming HERO and well-deserving “first woman” to be recognized under the Dreams in Motion organization.

Have a great time at the game. Take some pictures and send them to us.

Sam Hoopes was overwhelmed when he was honored by Dreams in Motion on Wednesday afternoon during an assembly at Duchesne High School.

Hoopes is a counselor and basketball coach at Duchesne. He received a liver transplant on May 12, 2020.

His liver donor was from his best friend, Derek Herrera.

DiM’s co-founder Joel Brown explained the non-profit organization specializes in honoring people who have gone through health challenges and difficult times in their life while being involved in their community.

Hoopes is the first person from Utah that DiM has honored. The organization was formed last year and is based in Utah and Wyoming.

The goal for DiM is to provide the people they honor a first-class sporting event to attend in person.

“We wanted to thank Sam for his courage and ability to overcome difficult challenges in his life,” Brown said.

DiM’s board member Sidney Smith, who is a store manager/customer service supervisor at STRATA Networks, presented Hoopes with four Utah Jazz tickets to the April 15 game with the Washington Wizards.

“I don’t know Sam personally but hearing his story is absolutely amazing,” Smith said. “People from STRATA Networks wanted to give you something to have some fun.”

Hoopes and his family will also have a free night stay at the Marriott Hotel that was lined up by DiM’s board member John Olsen.

DiM’s co-founder Bruce Tippets said his organization first found out about Hoopes when he read a story called “Duchesne coach receives the gift of life from his best friend,” published Feb. 15 on UBMedia.biz.

Tippets had the opportunity to meet Hoopes in person a couple of months ago when he was covering the Duchesne girls and boys state basketball games.

He didn’t bring up DiM but just wanted to find out what Hoopes was like. After the conversation Tippets knew Hoopes would be the perfect person for DiM to honor.

Chelsea Hoopes, who is Sam Hoopes’ wife, wanted to thank the students and the teachers at Duchesne High School for everything they have done for the family.

“We all know that Sam is a great guy and he puts his heart into the school,” Chelsea Hoopes said. “We are grateful for the community and for DiM for having us here.”

DiM wanted to thank Billy Hoopes for helping with the assembly at Duchesne.

When the assembly was finished Sam Hoopes received a standing ovation from the students and teachers in attendance.

Each recipient of the Dreams in Motion honor receives a “dream, first-class experience” to a sporting event, for example a trip to Salt Lake City for a Utah Jazz game or a University of Wyoming football or basketball game. 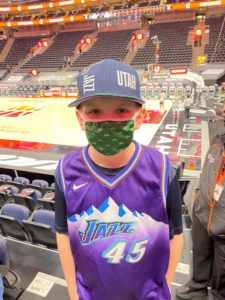 Bryson Quinney is a huge sports fan, so he was thrilled to receive the invitation to attend the Jazz–76ers game. He said, “Heck yeah, we can go watch him play it because I want to watch Donovan Mitchell beat up on Ben Simmons.” Quinney yelled for Mitchell even though Simmons scored 42 points. According to dad, he had a great time and loved it.

So on Monday, Bryson Quinney officially became the first “Hero” for Dreams in Motion. Quinney is a young man from Lyman, Wyoming, and he received a heart transplant less than a year ago. Quinney has had a number of challenges and has been valiant in dealing with those. He has a great LOVE for the Utah Jazz. Dreams in Motion will be giving Quinney a first class experience for an upcoming Utah Jazz game this season. He is the perfect example of who we want to recognize. I’m honored to be a co-founder of Dreams in Motion along with the other co-founder, my friend, Joel Brown. A big thanks has to go out to my longtime friend, board of director member Cody Beers for helping us with Quinney and getting him the letter. We have an AMAZING board of directors of 10 people from Wyoming and Utah who have a passion for helping others along with the love of sports. I certainly can’t wait to see what Dreams in Motion does in the future.